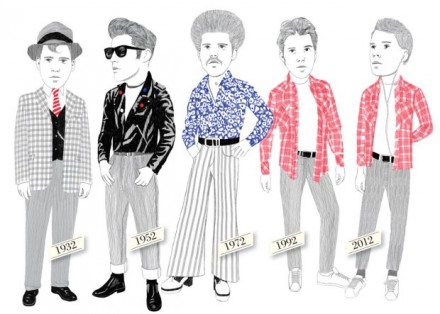 ” . . . we are clinging as never before to the familiar in matters of style and culture.” Kurt Andersen

In an era embracing technological change and where the familiar feels more and more unfamiliar, Kurt Andersen in his article “You Say You Want a Devolution” in the February issue of Vanity Fair describes an unnoticed backstory on our way to the singularity. It is not one of zeitgeists leading society to new forms, ideas and behaviors, but one that keeps eating around the edges of change and repurposing or slightly updating cultural artifacts.

On the surface, this premise might come across as absurd given that constant change had been drilled into us using social technologies that constantly need care and feeding. Andersen’s observation is that  . . . the appearance of the world has changed hardly at all, less than it did during any 20 year period for at least a century. If you discount technologies and possibly automobile design and look at the cultural landscape that you live in and compare it to twenty years ago, actually much of what you interact with feels quite familiar. The Aeron chair in which you’re sitting is identical to the Aeron chair in which I sat almost two decades ago, and this morning I boiled water for my coffee in the groovy Alessi kettle I bought a quarter of a century ago.

In a globally interconnected world that is sharing new thoughts, images, and video, we may be in reality repurposing what is rather than actually actively creating innovative artifacts to share with others. The sheer amount of communications and sharing may be dwarfing a society’s ability to create the new. It may instead rely on individual derivative expressions – that may feel new to others who are not familiar with that persons familiar.

Moverover, tens of millions of Americans, the uncool as well as the supercool, have become amateur stylists – scrupulously attending, as never before, to the details and meanings of the design and decor of their homes, their clothes, their appliances, their meals, their hobbies and more. The things we own are more than every like props, the clothes we wear like costumes, the places where we live, dine, shop and vacation seem like stage sets.

One large result of interconnectedness is that it is much harder to create a new style that can rise above the noise, gain the collective approval and then drive new patterns. Andersen focuses on the changes between 1910 and 1930 and 1950 to 1970. Especially between 1960 and 1970, there were incredible societal and cultural changes from the Dick Van Dyke early 1960s and the Brady Bunch in the 1970s. Materials, forms, lines, color and societal norms had radically changed in very noticeable ways to make them feel like two different historical epochs – separated by only ten years.

I have noticed in music how many musicians are relying on doing covers of existing music and trying to put their interpretation on it for the present generation. Music over the last 20 years has created a well-worn series of harmonies, tempos and rhythms that is essentially a pattern library palette of most musical expression. From Andersen’s perspective we have new personalities, but all that comes from many of them are historical beats in contemporary facades.

In architecture, while there has been new material technologies, the application of these materials using the modes of construction technology has created facades that are fairly familiar. Andersen compares the architecture of Frank Gehry and Morphosis Architects and believes that these two firms separated by 20 years essentially from a form and material standpoint are similar.

Acceptance of biomimicry and organic compositions in architecture have become the accepted norm for cutting edge architecture. Andersen comments that . . . these stagnant last couple of decades may be a secular rather than a cyclical trend, the beginning of American civilization’s new chronic condition, a permanent loss of appetite for innovation and the shockingly new.

“We seem to have trapped ourselves in a vicious cycle – economic progress and innovation stagnated, except in information technology; which leads us to embrace the past and urn the present into a pleasantly eclectic for-profit museum which deprives the cultures of innovation of the fuel they need to conjure genuinely new ideas and forms, which deters radical change, reinforcing the economic (and political) stagnation.”

While Andersen’s article does bring to light an interesting series of observations, one could state that if you went back to certain periods of time and looked back 20 years, would most of the immediate world that one lived in feel that radically different? Would your objects feel unfamiliar and stimulating to the point that you were hyper aware of their uniqueness? Does cultural innovation hinge on our every day common objects exhibiting new zeitgeists? I doubt it.

A real challenge to Andersen’s thesis is how does one define new? While art deco and streamlining felt new in comparison to classicism in a 20 year span, there as a major world war, huge societal changes, and an economic depression. There was a dissatisfaction with the existing order and a desire to seek out new ideas and forms that demonstrated new ideas. Deco has become a stylistic foot note, and Modernism that ran parallel to deco became the dominant idea for over fifty years. Then Post-Modernism created stylized versions of classicism and then Deconstruction exploded Post-Modernism and Modernism into striking materials and forms. Yet, what new idea can replace an idea if that idea has pushed the limits of a typology?

Many designers are struggling with the issues of on one hand rethinking object typologies and on the other wanting people not to become bored with artifacts that they purchase and exchange them for other derivative objects. This challenge brings to the forefront the role and practice of design as a force for societal change. The manifestos of the Italian Futurists or of Adolf Loos that rejected the familiar and demanded new models and modes that represented contemporary attitudes seem to be nonexistent in the new millennium. The modern sensibility has been defined by brief stylistic shelf lives, our minds trained to register the recent past as old-fashioned. Manifestos have been replaced by reality TV shows that scream new, but are essentially formulaic narratives that feed a desire for the familiar.

What is inescapable is that we are always living in the present, formed by the past, and looking to create a better future. Capitalism may depend on perpetual creative destruction, but the last thing anybody wants is their business to be the one that is creatively destroyed. Can most of us ever really break with the past in such a way that our ideas are truly transformational? No. And this is a positive fact that only a very few can ever claim such a transformational status. For most of us, we can only affect change in a very small proscribed circle of influence that can never break out into a societal stage. Tinkering with what is and releasing slightly new or modified strains is our reality. Clients and organizations want improvements, only if they at once feel different – and accessible at the same time.

On the road to repurposing and creating ever more prevalent derivative ideas, In our Been There Done That Mashup Age, nothing is obsolete, and nothing is really new, it is all good. In this model, where are the transformative big ideas that create new philosophy which then affect structure, material and expression? The question is, will it feel new?