I recently attended the Information Architecture Institute Idea 2008 Conference, October 7-8 in Chicago. The theme of the conference was ” . . . on designing complex information spaces of all kinds.”

When Richard Saul Wurman coined the term Information Architect in the late 1980’s, he was an architect that was designing travel books (Access Press) and was trying to come up with a term for designers that create information intensive artifacts. Since we cannot really agree on what the exact meaning of “information” and “architect”, I have come to the conclusion that merging the words into a concept would be difficult. I have hired several IA’s professionally and have come to the conclusion that there is little agreement of what an IA is and even what their outputs are. This was evident at the Idea conference, that there was no attempt in defining the term.

The first speaker was blogger David Armano who spoke on “Micro-Interactions in a 2.0 World.” A well-known and dynamic speaker, David took participants down a very rapid terrain of design, marketing and business through technological innovations. His central premise is that we are moving from passive consumers to active participants through existing social architecture technologies – not custom applications. Since all of our devices are internet enabled, the notion of a traditional browser experience is giving way to smaller more intimate digital apps that do one or two things. We as users cross-link these apps together. He used the term “life streams” to name this process of “engage, enable, and empower” our actions through a model of “usefulness, utility and ubiquity.” David also articulated new digital ecosystems such as the Nike Touch which uses “engagement” of “deposits” and “withdrawls” with several micro-functionalities bundled together. Social networks by their very nature amplify communications and he asked the audience what their “passion point” was.

Elliott Malkin, an artist from New York discussed “Information in Space.” His passionate and precise presentation went down a very indirect route that got me very excited. His initial metaphor was the hassidic concept of an eruv, or a physical demarkation between a secular world and a religious world using the same space. He referred to this psychographic space as having strong conceptual power for the intended group and for what for most people would not even notice. Unfortunately, I thought he was going to bring the metaphor back to digital technology and social architecture, but instead he discussed using digital technology to create a virtual eruv that could be monitored without rabbi’s going out to check if the eruv physical demarcations were intact. The implications of this metaphor in discussing how a shared space could have unique “functionalities” for different groups at the same time holds great promise.

Jesse James Garrett of Adaptive Path presented “Envisoning the Future of the Web.” They worked with the Mozilla Foundation in exploring the future of web browsers. Their concept is called Project Aurora. Now, when dealing with the future of anything, especially technology, it is difficult since we tend to use established conventions and behaviors and link it to a future that people can understand. Star Trek did it best by taking human behaviors and linking them to technologies that did not necessarily need to describe their inner workings. As viewers, especially hooked viewers, we understood the galactic federation model and the value system of the show to put the expressions and technologies in context.

With the future of a browser, Adaptive Path focused on augmented reality, or the overlay of digital information on the real world where there will be  data abundance and the question will be how to we visualize, focus and manage all of it cognitively and socially. Processing power, storage capacity, bandwith and graphic capabilities of computers will impact how we interact with each other through the digital cloud. “Context awareness,” “natural interaction,” and “continuity” would allow for more natural collaborations. Each of us would have a semantic profile and with geolocation, would allow for very rich interactions between people where ever they are. Two main questions arose from the audience. What was the time horizon of Project Aurora? Jesse stated they had a 10 year window into the future (this would be the equivalent of 40 years in technological terms). He said they had to balance “compelling” with “plausible” in their vision. My view was that their vision was too contemporary and linked to current “plausible” scenarios. The second question was that their concept could be viewed that the browser was an operating system. Jesse made it clear that they did not want to address the operating system vs. browser question, but in my mind the two converge in their scenario.

Chris Crawford a former game designer for Atari presented an interesting perspective on “Linguistic User Interfaces.” His perspective on intelligent systems is that smart computers that could interact with humans using extensive language patterns is not realistic. This is due to the Sapir/Wharf hypothesis that inside the human mind language and reality exist together.

Chris’ interesting take is that with games, a model for a computer to interact with humans is much more manageable since the worlds are much smaller. He further elaborated that software, verbs define the program and is core to the human/computer interface. With most current software, as the verb count increases, accessibility and expectability reduces. 100 verbs is the limit for most users. Chris is currently developing a linguistic user interface (LUI) for programs that can create stories. I found his perspective very compelling.

Alberto Canas, of the Institute for Human and Machine Cognition (IHMC) presented a surprising presentation called “From Meaningful Learning to a Network of Knowledge Builders.” IHMC has created the popular language mapping program CMAP, which I have on my computer. What was informative about his presentation on CMAP were examples of its application (pun intended). Knowledge essentially are concepts that are linked together with prepositions to make a relationship (this was a wonderfully simple definition). Humans have created written language to describe concepts that cannot easily be illustrated. CMAP are concept maps linked by phrases to form propositions. I already knew this in principle. Alberto then showed the power of CMAP through an ongoing project with the Panamanian government giving school children CMAP to describe their lives. The power of CMAP is that users can link images and web page addresses to their maps and can also link concept maps to other concept maps. They are essentially mini-websites which are non-linear. I will not look at CMAP the same way and believe that its potential is not fully understood by a large cross section of users.

Jason Fried, founder of 37Signals presented a lucid lecture called “Getting Real.” I had not heard Jason speak before, but am a heavy user of Basecamp and a real fan of its simplicity and how reliable it is. Jason is a real visionary and  their development process flies in the face of every convention that most digital consultancies use. They do not “plan” anything, do no “specification” documents, and do not use “actor or personas.” They focus on building things and figure out how to do it over time. Keep things small, use sharpie markers as the finest resolution when sketching ideas, and only have a core set of functions (a simple core).

Part of me was aghast, but I quickly saw the logic to their process. If you are designing for yourselves and then find users, the 37Signals model is perfect. Unfortunately, if you collaborate with clients to define the problem and then facilitate understanding, then the 37Signals model will not work. However (you knew there was going to be a “but”) I totally agree with his concept of “scratching your itch” and doing things with passion.

Aradhana Goel of IDEO gave one of the most thought provolking presentations called “Emerging Trends, Design Thinking, Service Innovation.” We have all heard of IDEO and it is one of the most influential innovative firms (along with Pentagram) merging design and engineering. Aradhana was trained as an architect and has only recently become involved with service design. Her perspective on human factors was clear and in alignment with my understanding. What was powerful was her ideas around linking human factors with trend factors. Human factors focus on digging into context, while trend factors find the context. She went on to compare and contrast these two areas and how service design is a logical next step in productizing intangible experiences.

Bill DeRouchey of Ziba Design gave a very direct and engaging discussion on “The Language of Interaction.” His deconstruction of everyday visual clues that we take for granted and their constant reinterpretation and reapplication to other situations was informative, common sense, but insightful.

Overall, there were several key themes that all speakers seemed to focus upon:
1) browsers are giving way to other internet enabled experiences
2) Windows, Icon, Mouse, Pointer system is under stress
3) Transaction is more than money
4) Link several apps, not one killer app
5) Focus on experiences, not just interactions

Upon reflection, I found this conference very fulfilling and reinforced certain convictions, challenged others and provided a very positive mental workout for me (which is what good conferences should do). I would like to compliment IAI for the organization of the conference and the lunches with different groups of people was enjoyable. There were twelve speakers in two days, interspersed with group lunches around the Chicago loop.

The IAI did not go down an exististential vortex of what an information architect is or is not (though it came close at times), which would have been a divisive and somewhat unimaginative exercise. Instead they linked together several strains of interesting ideas and left the participants to decide what it meant to them. 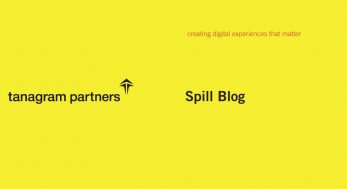 From the Tanagram Archives : Crowdsourcing

From the Tanagram Archives : When Thinking is Making